The Montana Railroad was the brainchild of Richard A. Harlow, a Helena, Montana attorney and entrepreneur, who envisioned the construction of a railway eastward from Helena to serve the mining and agricultural regions of Castle, White Sulphur Springs, Merino and central Montana. His first attempt at such a project, the Montana Midland, began planning in 1893, but almost immediately failed due to the onset of the Panic of 1893.

Undeterred, in 1894, Harlow organized the Montana Railroad, a project with similar goals. Construction work on the Montana Railroad began in 1895 at Lombard, a whistle stop on the Northern Pacific Railway 53 miles east of Helena. The Montana Railroad route proceeded eastward from Lombard up Sixteen Mile Canyon towards the mining districts in the Castle Mountains in southeastern Meagher County. The railroad reached Leadborough, at the southern end of the mining district, in November 1896; unfortunately for the railroad, however, the region's mines were already past their peak.

In the face of the declining mineral production in the Castle area, Harlow realized that his railroad needed a larger and more diversified traffic base. He therefore announced plans to extend his railroad still farther, and in 1899 railway construction crews began working eastward down the Musselshell River valley. The Montana Railroad was completed to the stage stop named Marino in 1900. At Marino, Harlow platted the new town of Harlowton in 1900. The Montana Railroad sold the first lot to a barber! Originally, the community fathers wanted to name the town Harlow but the U.S. Post Office claimed the name was too close to Harlem, Montana so the “ton” was added to Harlow. The stage stop was originally named “Merino” after the sheep breed. The line's tracklayers then turned northward, finally reaching Lewistown in 1903.

We note here that Charles Bair sent a full train of wool from his sheep ranch from Martinsdale on the Montana railroad to Boston in 1908. We encourage you to visit the Bair Family Museum in Martinsdale (and do the tour at least twice!).

In 1908, the Montana Railroad was purchased by the Chicago, Milwaukee, & St. Paul Railroad, which was then in the process of constructing a new transcontinental line through the state of Montana. The Lombard-Harlowton segment of the Montana Railroad became a part of this new Milwaukee line, although nearly all of the original route was heavily rebuilt to reduce curvature and raise the Sixteen Mile Canyon trackage above the flood-prone canyon floor. Work to electrify the line began in 1914. The Montana's Harlowton-Lewistown route became a secondary main line for the Milwaukee; it was later extended to Great Falls and several additional branch lines were built.

Nearly all of the Milwaukee Road's trackage in the area was abandoned in 1981, and today only a short segment of the former Montana Railroad (near Moore) remains in service. Most of the former grade can, however, still be seen and walked. Thanks to Wikipedia.com. 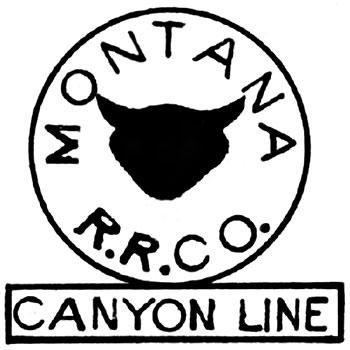