Our Buildings Have History!

The two buildings which house the Upper Musselshell Museum are located on the main street of the city (Central Avenue), and about two blocks south of U.S. Highway 12. Both buildings were constructed prior to 1909 of locally-quarried sandstone. The Times Building (11 South Central) first housed a wholesale liquor business, then a bank, a newspaper, a laundry, a cafe, a barbershop, second story apartments, various repair shops and, finally in 1987, our first museum building. The Marshall Building (36 South Central), started out as a hardware store and eventually housed a dry goods store, a livery, a blacksmith shop, second story apartments, J.C. Penney and then Bain’s Department Store, another dry goods store and finally a discount manufacturer's overstock store. The Marshall Building was purchased in 1996 and began its long and fruitful renovation the following year; the final construction was completed in 2010 with the opening of the second-floor exhibits.

Changing exhibits and displays are ongoing in the buildings offering ever changing stories about the Upper Musselshell Valley and its inhabitants.

Both buildings are air-conditioned in the summer. The Marshall Building has an elevator for handicap access to the second story.

The Times Building is currently closed to the public. 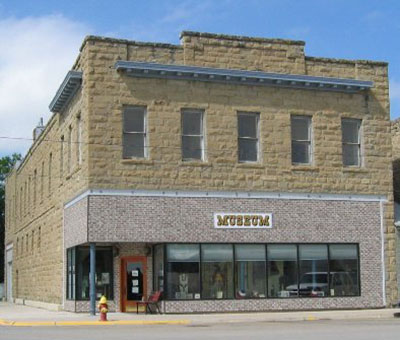 Museum Board of Directors: